Lauren Silverman has been forced to refute claims that she had been involved in an altercation with Alesha Dixon because she suspected the Britain’s Got Talent judge was too close to her boyfriend and lead judge Simon Cowell.

According to a report in The Sun newspaper, Silverman, the mother of Cowell’s only child, had confronted Dixon about getting cozy with Cowell during a break from filming Britain’s Got Talent.

According to the outlet, the backstage clash between the two had left Dixon visibly shaken.

“Lauren took Alesha to a curtained-off room backstage during a break,” The Sun’s source claimed. “It’s a communal area where crew make teas so it caused quite a reaction when a lot of people were stopped from going in.

“About 15 minutes later Alesha emerged looking shaken and had to have a quick glam touch-up and be whisked straight back on set. Lauren departed and never returned for the rest of auditions in London or Manchester.”

However, according to the Mail Online’s own source, no such bust-up ever occurred.

“Alesha and Lauren are very good pals. They have literally never had a row.”

Allegations of a spat with Dixon come only a few weeks after a source told The Sun that Silverman had been furious about a suspected fling between Cowell and former Spice Girl Mel B.

“Because he’s so charismatic, women flock to him – and it riles Lauren,” the source said. “Understandably, the fact she and Simon still aren’t married, despite having a son together, makes her a bit more insecure.

“Simon obviously gets on well with Mel and all his female co-stars, but that’s all there’s ever been to it; absolutely no hint of romance. They were both pretty livid – and mortified – when Lauren accused them of a ridiculous affair which never, ever happened.” 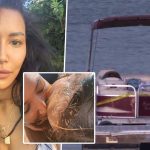